THE 2020/2021 MEMBERSHIP WINDOW CLOSED ON 28TH FEBRUARY 2021. FURTHER INFORMATION WILL BE SHARED IN THE COMING WEEKS REGARDING THE 2021/2022 MEMBERSHIP. THANK YOU FOR YOUR SUPPORT THROUGHOUT THIS PAST YEAR.

Your Island, Your Community, Your Club

Team sport can play a wonderful role in bringing people together and reinforcing a sense of national pride. As a nation, the Island can be rightly proud of the sporting success that our talented athletes have achieved at elite level on UK and International stages. However, we believe we can do more, we believe we can #BeeNyShare (BeBetter)

We believe it is in our communities best interests to have control of its destiny and we want as many people in the Isle of Man and Globally to join us and help achieve this ambition.

Sporting Club Isle of Man will therefore be YOUR club, owned by YOUR community.

Who can become a Member?

The community will own Sporting Club Isle of Man via an annual membership scheme.

Memberships are open to anyone (16+) with a connection to, or interest in, the Isle of Man.

So if you wish to help develop new opportunities through team sport that will add real value to your community then become a Member today.

Why become a member of Sporting Club?

All Sporting Club Isle of Man members will be able to participate in the high-level decision-making processes of the club and receive exclusive members only offers.

In addition, members will have the opportunity to be voted onto the Board of Sporting Club Isle of Man, or one of the teams it owns, as a member representative to ensure the members voice is heard at all levels of the club.

How much does it cost?

This £20 entitles you to become a member of Sporting Club Isle of Man, plus you can choose whether to become an official supporter of one of the teams we will all own.

If you do choose to support a team, half of your membership fee will go to the team you select e.g. Football or Cycling.

For a further £10 you can also be an official supporter of another team owned by Sporting Club Isle of Man.

There are 2 Tiers of Memberships and Official Supporters with Sporting Club Isle of Man:

Membership / supporters tiers are reallocated each year with those registering early gaining 'Yn chied' status and those subsequently registering gaining 'Feeagh' status.  This allows individuals to choose how they would like to engage with the club and the teams we will all own.

In addition to all the Feeagh perks below, Yn chied Members/Supporters will have access to the following exclusive perks:

All members / supporters who registered after the ‘first 500’ (at each club/team) will be allocated Feeagh status.

Support YOUR club by becoming a Member.

Only available to those 16 years of age and over.

Multiple memberships can be purchased in one transaction. However, only ONE unique person can hold a membership. (YOU WILL BE REQUIRED TO PROVIDE DETAILS OF EACH PROSPECTIVE MEMBER SO PLEASE HAVE THAT INFORMATION READY BEFORE YOU PROCEED.)

Please note refunds will not be issued for terminated memberships.

*Only one pin badge per member will be issued in conjunction with the club/team at which the member holds their 'Yn chied' status.

Please note - '1500' ECOkit training tops are custom pre-order items and as such returns cannot be accepted for incorrect orders.

Tweet
We have included our all important EcoKit Training Top in the purchase options but why not head over to our online store to see the rest of the 'Inaugural Season' range.

About the organizer
Sporting Club Isle of Man Limited 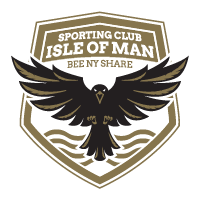